The True Location of the Jewish Temple!

Today, most researchers and Jewish scholars assume that the Holy of Holies was located where the Dome of the Rock now stands. However, there is no archaeological evidence of the Second Temple at the site!  Furthermore, the measurements of the Court (Haram al-Sharif) do NOT correlate with the Jewish literary sources which state that the Temple Mount Court was a SQUARE!

The Area That Is Assumed to Be The Temple Mount (Haram al-Sharif) Is A Rectangular Trapezoid (300m by 500m) Covering 37.5 Acres.

The Temple Mount According to The Mishnah Was 15 Acres.

The Temple Mount According to Josephus Was 10 Acres.

This hill was walled all round, and in compass four furlongs, [the distance of] each angle containing in length a furlong: but within this wall, and on the very top of all, there ran another wall of stone also, having, on the east quarter, a double cloister, of the same length with the wall; in the midst of which was the temple itself. – Josephus, Antiquities of the Jews 15.11.3

In The Temples that Jerusalem Forgot (Book) by Ernest Martin, and Jerusalem and the Lost Temple of the Jews (DVD) by Ken Klein, it is shown that after an extensive study of the works of Josephus, who alone gives us an eye-witness account of the destruction of Jerusalem and the Temple in 70 AD, the startling conclusion is that the Temple was NOT built on the present Temple Mount!

The Temple sat directly over the Gihon spring. The actual Temple site is 600 feet square and 600 feet South of Fort Antonia. Double colonnades connect the Temple (in the South) with Fort Antonia (to the North). In Acts 21, Paul stood between the Fortress and Temple and lectured the Jews from the slanted seated area. The bridge of the Red Heifer in the foreground crosses the Kedron Valley and leads to the Mount of Olives. The present Wailing Wall is the far back wall of the Fortress (left-hand side). Slanted flagstones surround Fort Antonia for protection. 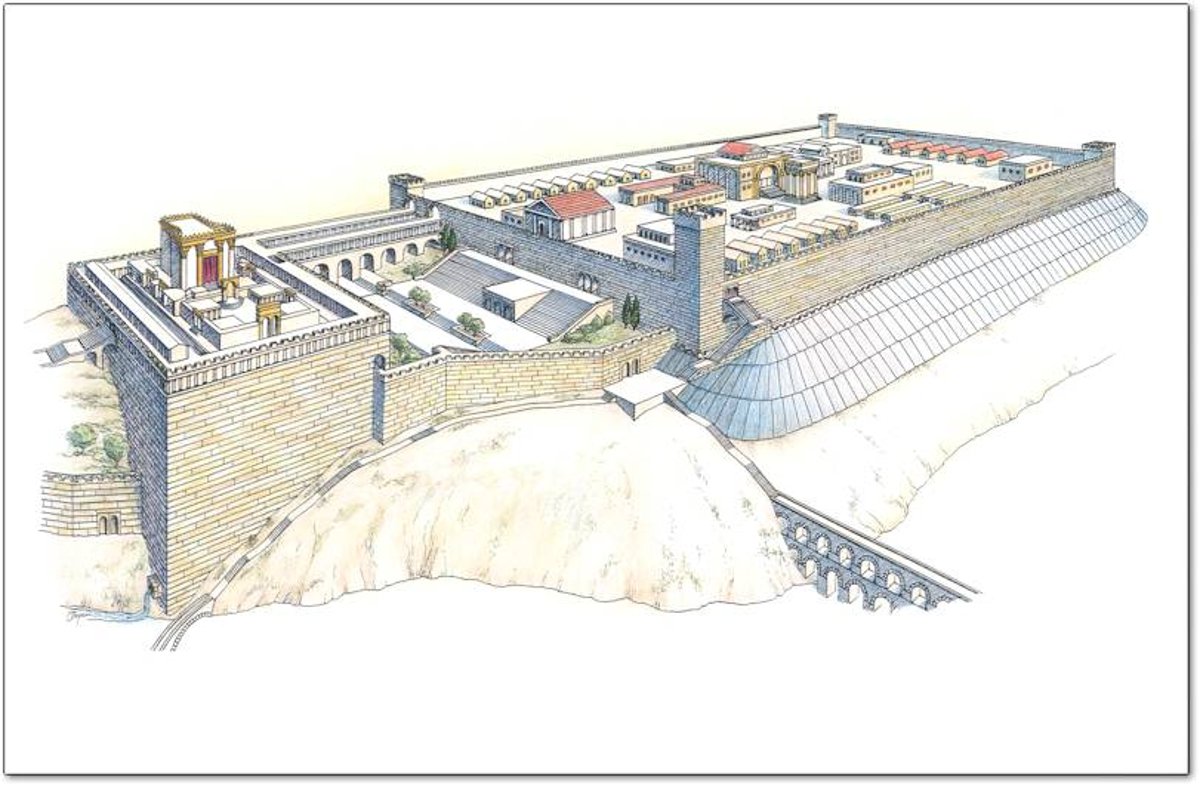 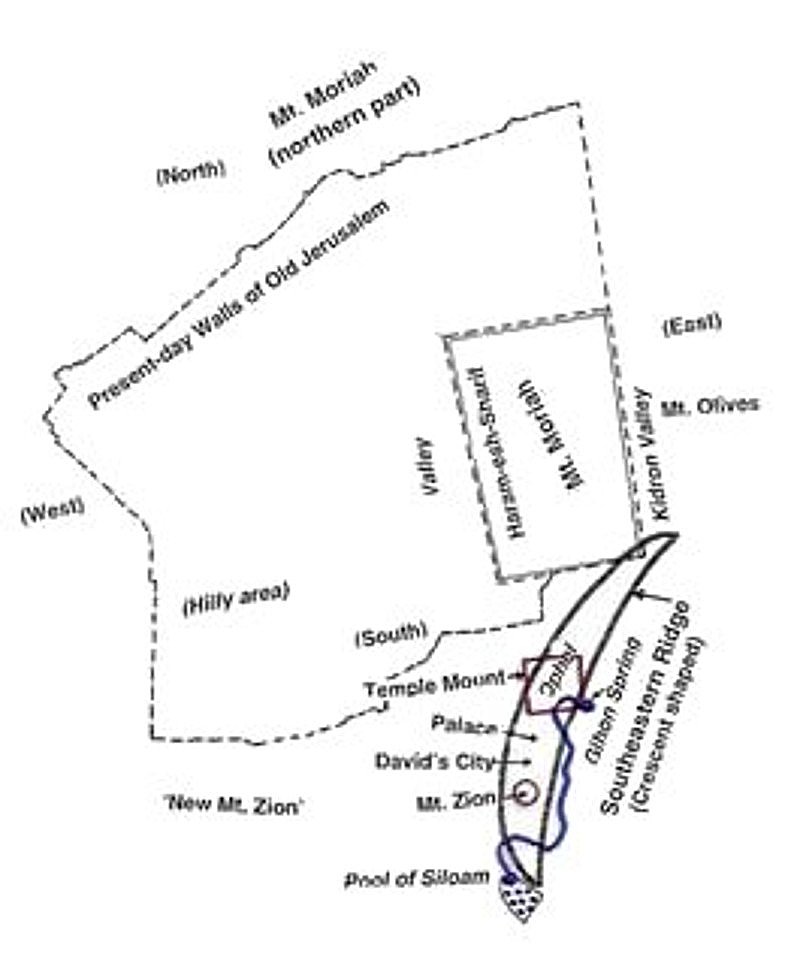 The Total Destruction of Jerusalem and the Temple

Now as He drew near, He saw the city and wept over it, saying, “If you had known, even you, especially in this your day, the things that make for your peace! But now they are hidden from your eyes. For days will come upon you when your enemies will build an embankment around you, surround you and close you in on every side,and level you, and your children within you, to the ground; and they will not leave in you one stone upon another, because you did not know the time of your visitation.” – Luke 19:41-44

Were they ashamed when they had committed abomination? nay, they were not at all ashamed, neither could they blush: therefore shall they fall among them that fall: in the time of their visitation they shall be cast down, saith the LORD.- Jeremiah 8:12

Then as He went out of the temple (Strongs #2411), one of His disciples said to Him, “Teacher, see what manner of stones and what buildings are here!”  And Jesus answered and said to him, “Do you see these great buildings? Not one stone shall be left upon another, that shall not be thrown down.” – Mark 13:1-2

2411 i`ero,n hieron {hee-er-on’} • The temple of Jerusalem consisted of the whole of the sacred enclosure, embracing the entire aggregate of buildings, balconies, porticos, courts (that is that of the men of Israel, that of the women, and that of the priests), belonging to the temple; the latter designates the sacred edifice properly so called, consisting of two parts, the “sanctuary” or “Holy Place” (which no one except the priests was allowed to enter), and the “Holy of Holies” or “the most holy place” (which was entered only on the great day of atonement by the high priest alone). Also there were the courts where Jesus or the apostles taught or encountered adversaries, and the like, “in the temple”; also the courts of the temple, of the Gentiles, out of which Jesus drove the buyers and sellers and the money changers, court of the women.- Strong’s Concordance

As he came to Jerusalem in his progress, and compared the melancholy condition he saw it then in, with the ancient glory of the city, and called to mind the greatness of its present ruins, as well as its ancient splendor, he could not but pity the destruction of the city, so far was he from boasting that so great and goodly a city as that was had been by him taken by force; nay, he frequently cursed those that had been the authors of their revolt, and had brought such a punishment upon the city; insomuch that it openly appeared that he did not desire that such a calamity as this punishment of theirs amounted to should be a demonstration of his courage. Yet was there no small quantity of the riches that had been in that city still found among its ruins, a great deal of which the Romans dug up; but the greatest part was discovered by those who were captives, and so they carried it away; I mean the gold and the silver, and the rest of that most precious furniture which the Jews had, and which the owners had treasured up under ground, against the uncertain fortunes of war.– Josephus, The Wars of the Jews 7.5.2

And now all the soldiers had such vast quantities of the spoils which they had gotten by plunder, that in Syria a pound weight of gold was sold for half its former value. — Josephus, The Wars of the Jews 6.6.1

Josephus Describes the Total Destruction of the Temple and Jerusalem

Caesar gave orders that they should now demolish the entire city and temple, . . . it was so thoroughly laid even with the ground by those that dug it up to the foundation, that there was left nothing to make those that came thither believe it had ever been inhabited. This was the end which Jerusalem came to by the madness of those that were for innovations; a city otherwise of great magnificence, and of mighty fame among all mankind. – Josephus, The Wars of the Jews 7.1.1

They had cut down all the trees that were in the country that adjoined to the city, and that for ninety furlongs round about (10 miles), as I have already related. And truly the very view itself of the country was a melancholy thing; for those places which were before adorned with trees and pleasant gardens were now become a desolate country every way, and its trees were all cut down: nor could any foreigner that had formerly seen Judea and the most beautiful suburbs of the city, and now saw it as a desert, but lament and mourn sadly at so great a change: for the war had laid all the signs of beauty quite waste: nor if any one that had known the place before, had come on a sudden to it now, would he have known it again; but though he were at the city itself, yet would he have inquired for it notwithstanding. — Josephus, The Wars of the Jews 6.1.1

And now the Romans set fire to the extreme parts of the city, and burnt them down, and entirely demolished its walls. – Josephus, The Wars of the Jews 6.9.4

Eleazer, the Jewish Commander at Masada, Stated that Three Years after the War (73 AD) the ONLY Structure left Standing Was Fortress Antonia

“And where is now that great city, the metropolis of the Jewish nation, which vas fortified by so many walls round about, which had so many fortresses and large towers to defend it, which could hardly contain the instruments prepared for the war, and which had so many ten thousands of men to fight for it? Where is this city that was believed to have God himself inhabiting therein? It is now demolished to the very foundations, and hath nothing but that monument of it preserved, I mean the camp of those that hath destroyed it, which still dwells upon its ruins; some unfortunate old men also lie upon the ashes of the temple, and a few women are there preserved alive by the enemy, for our bitter shame and reproach” – Josephus, The Wars of the Jews 7.8.7

Now as to the tower of Antonia, it was situated at the corner of two cloisters of the court of the temple; of that on the west, and that on the north; it was erected upon a rock of fifty cubits in height, and was on a great precipice; it was the work of king Herod, wherein he demonstrated his natural magnanimity. In the first place, the rock itself was covered over with smooth pieces of stone, from its foundation, both for ornament, and that any one who would either try to get up or to go down it might not be able to hold his feet upon it. Next to this, and before you come to the edifice of the tower itself, there was a wall three cubits high; but within that wall all the space of the tower of Antonia itself was built upon, to the height of forty cubits. The inward parts had the largeness and form of a palace, it being parted into all kinds of rooms and other conveniences, such as courts, and places for bathing, and broad spaces for camps; insomuch that, by having all conveniences that cities wanted, it might seem to be composed of several cities, but by its magnificence it seemed a palace. And as the entire structure resembled that of a tower, it contained also four other distinct towers at its four corners; whereof the others were but fifty cubits high; whereas that which lay upon the southeast corner was seventy cubits high, that from thence the whole temple might be viewed; but on the corner where it joined to the two cloisters of the temple, it had passages down to them both, through which the guard (for there always lay in this tower a Roman legion) [6000 men + support = 10,000 men] went several ways among the cloisters, with their arms, on the Jewish festivals, in order to watch the people, that they might not there attempt to make any innovations; for the temple was a fortress that guarded the city, as was the tower of Antonia a guard to the temple; and in that tower were the guards of those three (14). There was also a peculiar fortress belonging to the upper city, which was Herod’s palace; but for the hill Bezetha, it was divided from the tower Antonia, as we have already told you; and as that hill on which the tower of Antonia stood was the highest of these three, so did it adjoin to the new city, and was the only place that hindered the sight of the temple on the north. And this shall suffice at present to have spoken about the city and the walls about it, because I have proposed to myself to make a more accurate description of it elsewhere. — Josephus, The Wars of the Jews 5.5,8

The Remains of the Two Columns Joining the Fortress Antonia to the Temple Can Be Seen Today!

In the recent (2007) image of the Temple Mount (below), the remains of the two columns joining the Fortress Antonia to the Temple can clearly be seen – just to the left of the steps in the foreground!

“on the corner where it joined to the two cloisters of the temple” – Josephus, Wars of the Jews 5.5.8 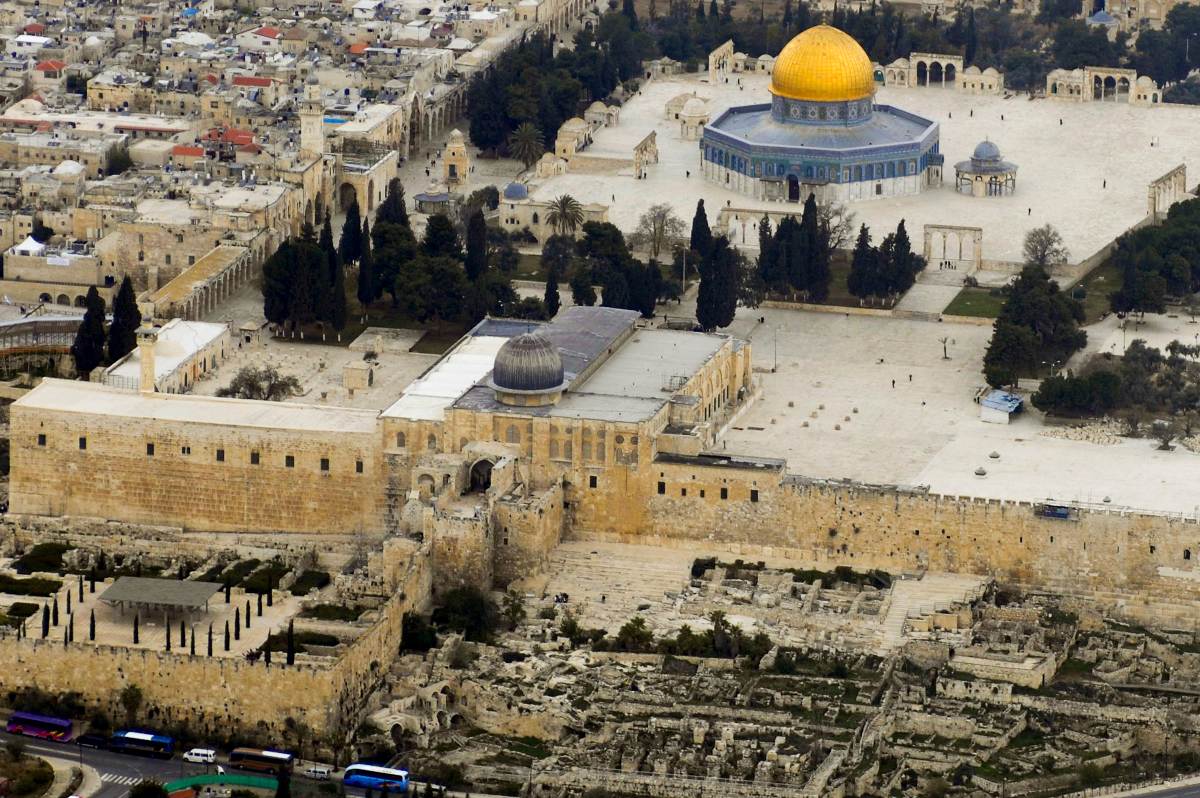