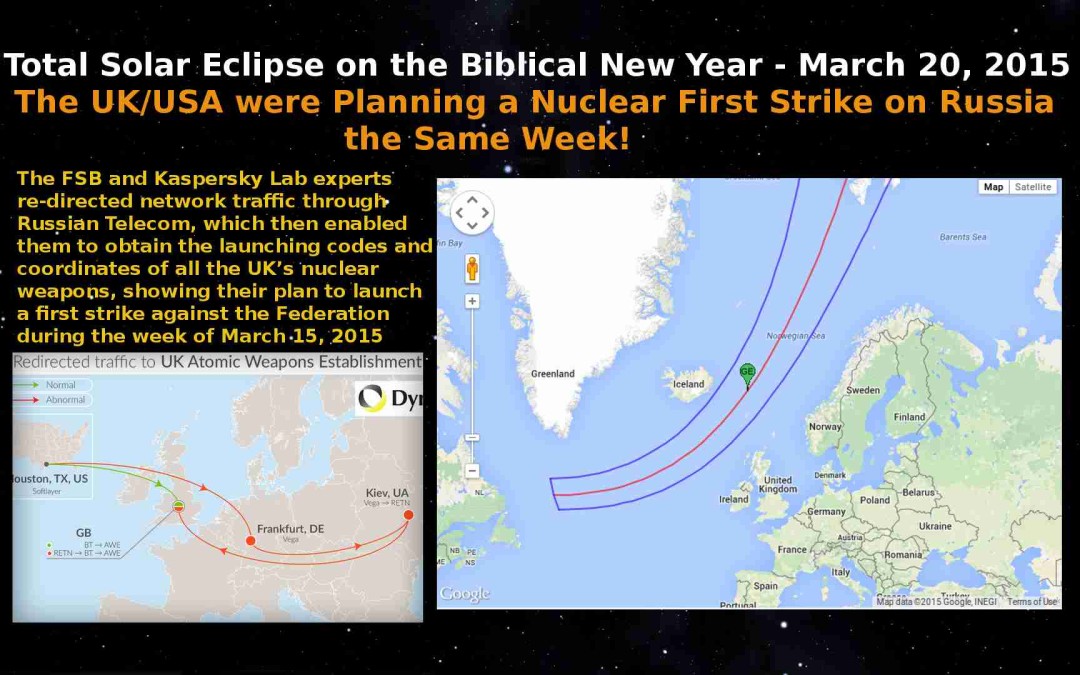 A total solar eclipse welcomed in the Biblical New Year along with the beginning of a new, and likely the final, seven-year cycle (shabuwa). It occurred off the West coast of the United Kingdom and Norway.

Most interesting, and disturbing, are both the timing and location of this eclipse.

The TIMING of The Total Solar Eclipse

The total solar eclipse happened on the Eve of the Biblical New Year (The first day of Nisan). Not only was this the beginning of a New Year, but it was also the beginning of a New Shabuwa (God’s seven-year cycle). The Archangel Gabriel told Daniel that seventy shabuwa have been pre-determined to deal with the Jewish people and Jerusalem.

“Seventy weeks (Hebrew: shabuwa) are determined For your people and for your holy city, To finish the transgression, To make an end of sins, To make reconciliation for iniquity, To bring in everlasting righteousness,To seal up vision and prophecy, And to anoint the Most Holy.” – Daniel 9:24

The sixty-ninth shabuwa was completed with the Resurrection of Y’shua.

“And after the sixty-two weeks Messiah shall be cut off, but not for Himself;” – Daniel 9:26

The seventieth shabuwa is all that we have left! This is the time that the Man of Sin makes a Peace Treaty with Israel for seven years.

“Then he shall confirm a covenant with many for one week (shabuwa); But in the middle of the week (shabuwa) He shall bring an end to sacrifice and offering. And on the wing of abominations shall be one who makes desolate, Even until the consummation, which is determined, Is poured out on the desolate.” – Daniel 9:27

Even though the Biblical New Year has already started, we have to wait until a Peace Treaty is initiated to start counting the Final Shabuwa; it doesn’t have to start exactly on the first day of the year. However, the Peace Treaty will most likely be initiated during the first year of a shabuwa. Since there are only seventy shabuwa in total, we can expect that the Final Shabuwa will not significantly overlap two different seven-year cycles. Otherwise, Gabriel would have told Daniel that there were seventy-one shabuwa appointed for his people! The total solar eclipse on the Eve of a New Shabuwa is a sign that this is the shabuwa to watch!

This solar eclipse happened after two previous blood moons had occurred on God’s Appointed Times – and with two more yet to come! Additionally, Saturn (Satan) was located in the Scorpion constellation (The Kingdom of Darkness), where it had first entered on February 1, 2015.

This all symbolically represents Satan trying to establish his Kingdom. Saturn enters Scorpius once every thirty years, but this time it is different. We now have a plethora of signs occurring on God’s Appointed Times. A few articles available over the internet suggest that during this same week of the solar eclipse we narrowly averted nuclear war!

Top US Commander Under Arrest For Refusing To Fire Nukes At Russia
March 19, 2015
http://www.whatdoesitmean.com/index1849.htm

The LOCATION of The Total Solar Eclipse

The eclipse was just off the coasts of the UK and Norway; two critical nations that seem to be making preparations for a confrontation with Russia! Solar eclipses act as a spotlight, highlighting areas like the characters on a stage. This eclipse was a sign indicating what area of the world to watch!

Thousands of Norwegian troops neared the Russian border this week preparing for the influx of a US Marine Expeditionary Brigade, estimated to number between 14,000-18,000, whose tanks, armored vehicles, artillery, ammunition and battle equipment have flooded into Norway this past year.

According to the article “Russia Warns “State Of War” Exists As UK Nukes Prepare First Strike”: The total solar eclipse happened during the same week that the UK was planning a first strike nuclear attack on Russia! The plot was uncovered

Both the FSB and Kaspersky Lab experts, the MoD [Russian Ministry of Defense] reports, were able to swiftly reverse engineer the computer code(s) involved in this massive NSA spying operation which then enabled them to electronically obtain the launching codes and coordinates of all the UK’s nuclear weapons showing their plan to launch a first strike against the Federation during the week of 15 March.

They accomplished this feat by re-routing network traffic through Russian Telecom in Kiev! An independent newspaper confirmed that this happened!

Back to the article “Russia Warns “State Of War” Exists As UK Nukes Prepare First Strike”:

Upon the MoD’s confirmation of the UK’s intention to launch a nuclear first strike against the Federation, this report continues, Russian military forces throughout the country were immediately activated with a special emphasis placed upon massive rocket-artillery maneuvers on the southern borders.

Foreign Minister Lavrov, this report notes, further warned the West this week that Moscow would respond to NATO “in an adequate way.”

Satan is trying to set up his kingdom! He won’t succeed this time due to the fact that something is hindering him.

For the mystery of lawlessness is already at work; only He who now restrains will do so until He is taken out of the way. – 2 Thessalonians 2:7

Saturn will leave “The Kingdom of Darkness” on April 21, 2015, when retrograde motion takes it back into Libra (The Balance Scales), where Satan’s Kingdom will hang in the balance! After six months, Saturn will re-enter the Scorpion again, on October 28, 2015 – this time to stay! Why is Saturn (Satan) allowed to set up his Kingdom at this time?

It is because the restraining force (the righteous ones) have been removed!

The Appointed Time of Yom Teruah (Trumpets) is when we should expect to see this event take place; and Yom Teruah occurs on September 14-15, 2015, just before Saturn re-enters the Scorpion constellation!

And another thing – the first heavenly body that Y’shua told us to watch was the SUN!

By the way – There will be a partial solar eclipse on the Eve of Yom Teruah this year!