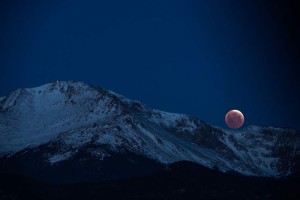 COLORADO SPRINGS, CO – APRIL 04: Sky-watchers got a glimpse of the Blood Moon in the shortest eclipse of the century as it sets behind Pikes Peak April 4, 2015 in Colorado Springs. The top edge of the eclipsed moon should appear much brighter than the rest of the orb.(Photo By John Leyba/The Denver Post via Getty Images)